skip to main | skip to sidebar

With the closing of Hamilton Park for renovations the HPNA is sad to announce that the 2009 Hamilton Park Festival (originally scheduled for June 20th) has been postponed until the renovations are complete (Oct/Nov 2009). We know the HPNA's Parkfest has been a tradition for many residents throughout the city however we weren't able to locate a suitable alternative location for this year's event. Rather than our usual Parkfest, the HPNA will have a Parkfest / Hamilton Park renovation celebration when the park reopens this fall.

We hope to see you this fall and hope that you'll still plan to join us for future summer festivals.

The Hamilton Park Farmer's Market will proceed as scheduled. It will be located in the paved walking area on Pavonia Avenue between McWilliams Place & Erie Street (directly across the street from Hamilton Park in front of Hamilton Square).

Thanks,
Olu Howard
HPNA President
Posted by Olu at 11:32 PM

Hi All,
As I mentioned in my note last Wednesday on the HPNA's email list, the HPNA has been working with the city regarding the closing of Hamilton Park and the park renovation in general. This has been a long hard process to get the renovation underway and we're glad to see it finally come to fruition. On Friday, HPNA board members met with the city's Division of Architecture to reaffirm our lines of communication and to address the concerns raised by some of the residents of the area. The meeting went very well and the city has been very responsive to our needs. They also took the time to provide additional details and documentation around the choices made regarding construction. Attached at the bottom of the email is the letter the city is sending to all the area schools, assisted living facilities, and large condo buildings to notify them of the closure.

In addition to the letter I have added following details from our meeting (which should answer most of the questions posed over the past few days).

Notification/Communications:
Glenn Wrigley, the City's Chief Architect, has apologized for the unannounced closure of Hamilton Park and agreed to do the following to insure the public is notified of the closure of the park (which will occur on April 30, 2009).
Alternate Park Spaces:
The Hamilton Park neighborhood already has a second park less than three blocks from Hamilton Park called Enos Jones Park (located at Brunswick & Eighth Street). Enos Jones features:

In addition to our already existing alternate park, Paul Silverman of Exeter Property (developers of Hamilton Square) has graciously offered to allow the city to use now the vacant lot between the two buildings on McWilliams Place as an alternate park space. As mentioned in the Chief Architect's letter, the City has accepted his offer and is working closely with both Exeter Property and Goldman Sachs to build a temporary park which will have the following features:
It should open by May 15, 2009 and will remain open to the public until the renovation is complete.

Trees:
A lot of concern has been raised over the trees marked with X's. The City has assured us that every effort will be made to save every tree possible and that trees are only marked to come down where absolutely necessary. The trees that are marked fall into the following categories:
One final note, while it may not be apparent from the previously posted documents, the city is planting additional trees as well. They have provided the HPNA with the landscaping plan which shows the trees being preserved (they look like a cloud) the new trees being put in (they look like circles) and the retention basins being installed to prevent flooding. The landscaping plans can be downloaded at http://www.hamiltonpark.org/PDFS/Hamilton_Park_Renovation_Landscape_Plan.pdf. Again this PDF file is rather large so it may take some time to download.

Timetable:
Unfortunately not much could be done here. The park renovation would cost considerably more if it were completed in sections and it would take years rather than months. Additionally, the construction would present a constant safety risk to those people using the park while it went on. The bid contract calls for the park to be completed in 1 year or less and the contractor's internal estimates are that it will be completed in six months.

For any remaining pre-construction questions the HPNA has arranged a public meeting at the Hamilton Park Gazebo on 10:00 AM this Saturday April 25th. Councilman Fulop will answer any outstanding questions regarding the renovation. 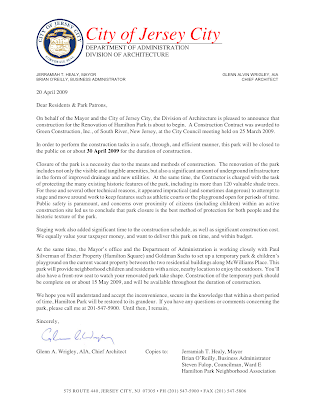 The Final Plans are available for viewing:

Construction is about to get underway! Thanks to Jen Greely and everyone else that helped to make this happen.
Posted by SteveG at 4:39 PM

The Hamilton Park Neighborhood Association's mission is to serve the interests and needs of residents by promoting a cleaner and safer neighborhood, uniting residents in common causes, cooperating with city government, acting as a sounding board for the opinions of residents, representing local residents at city meetings, and serving the interests of the citizenry of downtown Jersey City.